Isn’t it ironic that the Islamic month of fasting is all about food? Well, at least it is for those of us who descend upon the special Ramadan bazaars like a bunch of starving velociraptors. Throughout the month, the Muslim community sets up pop-up markets throughout Malaysia and sell some delicious foods that you can only get during Ramadan, and several tasty standards as well. During their holy month, Malaysia’s Muslims showcase their living heritage and culture through food, and everyone celebrates!

The Pasar Ramadan (meaning Ramadan markets) all start around 3-4pm. While their primary purpose is to cater to Muslims who are preparing to break their fast for the day, the vendors are very happy to share their delicacies and traditions with non-Muslims as well. Not only is it a great chance to pretend like you’re Anthony Bourdain and sample some incredibly yummy food, it’s also a wonderful way to experience the welcoming, warm and friendly local Muslim community. At all the markets I’ve been to, I’ve been greeted with smiles, enthusiasm and friendliness, so don’t worry – you will be welcomed.

In Penang, there are several popular Ramadan bazaars, which I’ll list below. But today, we’re going to visit three very unique ones that highlight the wonderful differences between Penang’s markets: the Teluk Bahang bazaar, a really mellow market featuring traditional Malay classics; the Little India Ramadan market, which has mouth-watering Indian-Muslim cuisine; and the Bayan Baru Ramadan bazaar, one the biggest one on the island with 150+ vendors, and a reputation for having the tastiest Malay food of all the markets. Have a napkin handy as you read this because you’ll likely be drooling soon.

Driving from Batu Ferringhi toward the Taman Negara national park, just past the giant pitcher-plant roundabout (which you cannot miss) you’ll see the Teluk Bahang bazaar lining the street ahead of you.

This is a smaller, very local Ramadan market on a nice, wide street, which makes it more relaxed and less overwhelming to explore than many of the others around Penang. It’s a great one to check out for your first pasar Ramadan experience. Today, my friends Rainer, Jays and I are the only non-Malays here, which, judging by the looks on the vendor’s faces, is pretty entertaining for them. This pasar Ramadan features very traditional Malay food, like: 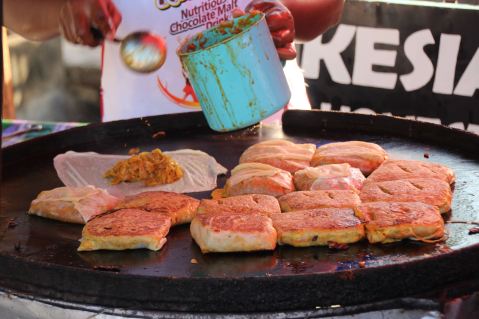 Murtabak is crispy griddle-fried dough folded over egg, onions, chicken or other meat, and served with spicy sauce. It’s a very hearty meal.

Originating in Penang and now world-famous, nasi kandar is a popular Malaysian meal that consists of a big old serving of rice and your choice of a number of curries and veggies served atop it. There are endless varieties – too many to list here. But don’t worry, you don’t need to know the names of the curries – just point to the ones you want and they’ll scoop some on your rice for you. Try as many as your stomach can hold!

For ikan panggang, banana leaves are stuffed with rice, fish and sometimes a tomatoey sauce, which is then roasted over coals. The leaf wrapper helps keeps the fish extra succulent. 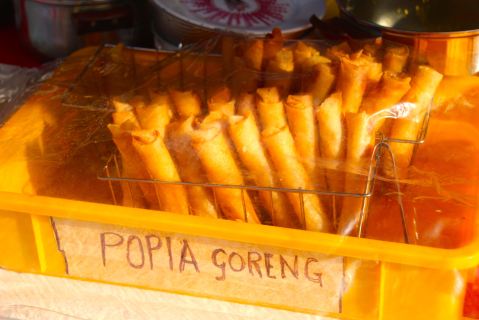 These crispy sticks of yumminess are kind of like the Malay version of the Chinese egg roll. The fillings usually contains a light, sweet chili sauce, shredded carrot, bean sprouts, and sometimes radish, jacama or egg.

Popia basah is the same thing as the popia goreng, just not fried. And it’s deeeeelish! Just ask Rainer:

Next up, we have…

A favorite among Penang’s people are satays: grilled meats on a stick. You’ll find chicken, fish balls, meats and seafood. There are also a few more unusual offerings, such as the one above. (Who doesn’t want chicken-feet satay? Answer: me. Blahhhhk!)

And when you’re ready for dessert…

Jays and I are ready for Kuih!

Kuih are special desserts made only around the time of Ramadan. Like kuih bingka, a sweet potato cake made with coconut milk, sugar and vanilla. Or onde – sticky rice balls stuffed with unbelievably sweet palm sugar syrup and coconut. One especially good one to try is:

Buah melaka  is hard to find during any other time of the year. These very sweet little balls are made with sticky rice, or sometimes with sticky rice powder, and stuffed with palm sugar then rolled in coconut flakes.

Malays like their sweets! There are so many to try during Ramadan.

And if you need something to wash it all down, try:

Jagung, which is the orangy-yellow drink on the left

Jagung is a sweet corn drink that is so sugary that it makes my teeth ache. Malaysians love this stuff! 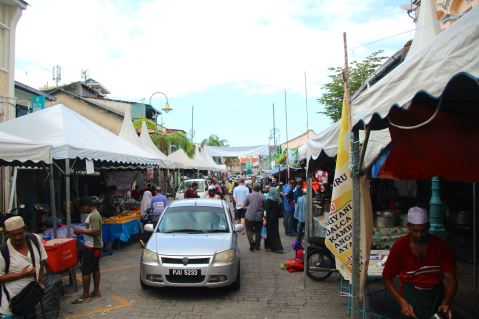 Much more bustling, densely packed and quite different in its food offerings is the Little India Ramadan Bazaar in Georgetown. Given its location, as you might expect, this Ramadan bazaar features delectable Indian-Muslim food. But people of every race and religion are here to enjoy it – it’s common to see Chinese friends, Malay families, Hindu Indians and matsaleh (aka westerners) all salivating over giant caldrons of fragrant curries. My friends, your noses will be so happy sniffing the lovely, spiced scents of many special treats, like:

Ayam kecap (pronounced like “ketchup”), otherwise known as chicken in a sweet soy sauce, is a local favorite. (It’s also my husband’s fave). 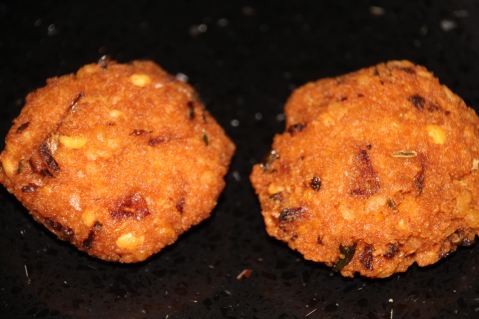 Okay, “tasty puck” is not the official name of these delicious disks made of lentils, chili, cumin and happiness, but that’s what I call them since they’re now going to be a staple of my diet during this yummy month. (I think the real name is Masalodeh, but I could have heard that wrong since I was happily and noisily chewing on one while the vendor told me the name).

This super sweet dessert is sometimes made with potato, other times with flour. Sometimes bengkang is even made with pandan leaf, which can give it this distinctive green color.

Found almost exclusively during Ramadan, tepung pelita is a dense, sweet dessert made with coconut milk, plenty of sugar, and sometimes also rice.

See that orange tower on the right? Those sweets are commonly referred to as “surfboards,” which you may only be able to find here at this market.

Thin ropes of batter are fried on a flat griddle to create a pretty net-like bread, which is folded and used to scoop up curry. And when you’re nearly out of sauce, roti jala is particularly effective to use like a zamboni on an ice-skating rink to get every last molecule of that curried goodness in your mouth.

Revered by locals (and especially my Bahasa teacher) as the best Ramadan bazaar for the tastiest and highest quality Malay food, the Bayan Baru market is impressive. With more than 150 vendors, there’s a vast array of delectable delicacies offered here: steaming cauldrons of Malay curries filled with fish, chicken and mutton; rainbow colored layer cakes; grilled teriyaki balls; nasi lemak; build-your-own style sautés; kebabs – you name it and it’s here. How about we let the photos do the talking?

If you’d like to hit a couple more Ramadan bazaars, which I recommend since each has its own distinct feeling and flavor, try:

Bayan Lepas Pasar Ramadan, which has HUNDREDS of stalls. You’ll find it on Jalan Mahkamah.

Jelutong Ramadan Bazaar, which has more than 100 stalls. It’s on Masjid Sungai Pinang.

There are so many more wonderful dishes to try at the Ramadan bazaars than aren’t listed here – piping hot samosas, pasembur salads, aromatic briyani rice concoctions, and endless varieties of curries. So head on down to one of Penang’s awesome Ramadan bazaars with an empty stomach, a smile, and a sense of adventure and you’ll have a fantastic time. Bon appetite, my friends!