“Apologies in advance if I let out a heart-stopping scream or two as we drive home,” I tell my visiting friends when picking them up from the airport. They laugh and laugh, until we have a near-death experience that leaves them screeching like a pterodactyl and embedding their fingernails in my dashboard.

Some Malaysian drivers are so impressively terrible that there are actually radio ads telling people they have to stop for red lights. Seriously. This obvious road rule is not common knowledge here, which you will realize when you see a motorbiker nearly t-bone you in an intersection, then weave in front of your car at the last second. (Aaaand cue heart attack!)

But fear not, here are 6 tips to help you drive (at least a few blocks) in Malaysia without dying:

Tip # 1. Recognize that lanes are merely a suggestion.

Pass cars by driving into oncoming traffic? Sure bus, why not?

Some drivers here act like they’re in The Crash-n-Smash Derby: they weave, dodge and cut each other off to get to the finish line first. You can’t expect to win by following pesky traffic laws, now can you?

But aside from those who were seemingly taught to drive by blind monkeys, there’s actually a valid reason why many drivers don’t adhere to lanes here: motorbikes. Motorbikers usually drive slower than cars and take up at least a quarter of the lane, so you have to pass them, sometimes by leaning into the lane beside you. No one bothers to look for cars in the next lane, they just fade over and expect that if there’s a car over there, they’ll fade too. This will likely be a shock to you the first time you’re “that car over there” and you suddenly see a bus kissing your passenger door.

(Are you freaking out yet? It’s okay – just play my driving game to help soothe your nerves. Like in the above scenario, score 1 point if your side-mirror doesn’t touch the bus; 2 points if it does.)

If you’re made of weaker stock – or if you fear trivial things like head-on collisions – you may be tempted to honk, slow down or swerve wildly. This will make other drivers look at you like you’ve got ebola. Since everyone else flows with the chaos, your safety-inspired moves may ironically disrupt traffic and possibly cause an accident. So go ahead and straddle two lanes!

Tip #2. Accept that Malaysian freeways are The Thunderdome. 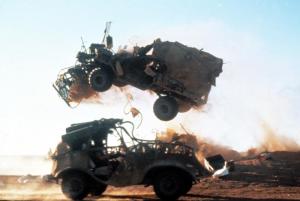 Yesterday, I saw truck going 110km/hr in the emergency lane while everyone else was stopped dead due to an accident. When he nearly ran into a cop on the shoulder, the officer briefly looked up from his phone, then kept on updating his Facebook status as the truck edged around him. So don’t expect anyone to follow traffic laws or you’ll be insanely irritated. Just accept that you’re in The Thunderdome and try to make it out alive.

Oh, and if you’d like to meet Mad Max as you’re zipping down the freeway, just hop in the passing lane. As if by magic, a freakishly aggressive car will appear out of nowhere, just centimeters from your bumper. It doesn’t matter if there’s a car in front of you, or that you’re obviously passing a slow tractor, or that you’re going 130km/hr in a heavy rainstorm, Mad Max will be dangerously glued to your tail. Don’t even try getting him to back off by waving or tapping on your brakes, because apparently that’s Mad Max’s signal to try to pass you by squeezing between you and the median and/or the tractor beside you. (Score 2 points if you don’t have an aneurism.)

You’ve heard of double-parkers, but how about triple parkers that block all lanes of traffic? Parents of school-age kids have no f*cks to give – they park on the sidewalk, in coned-off driveways, and in the middle of busy roads. One time, parents in front of me had parked in all three lanes, and one particularly defiant parent dared to park in the ONCOMING TRAFFIC LANE. That lady did not give One. Single. F*ck. That was so bold that it completely transcended my irritation and crossed into the territory of Stunned Awe. Slow clap for you, f*ckless traffic-stopping parent. (Score 1 point for every time you swear at a double parker).

Tip #4. Don’t believe the arrows painted on the road.

Lies, those arrows are lies! Nothing produces anxiety in the mind of a polite Californian driver like me than by believing the arrows on the road that say your lane is going straight, and then 3 meters later you’re stuck in a turn lane. WTF? Don’t worry – just refer to Tip #1 and fade into the lane going straight. The locals have a special move for this situation though: if they find themselves in the turn lane and no one is stopped ahead of them, they just blow through the intersection and go straight. And no one bats and eye. (Score 1 point for swerving out of the way of a driver who goes straight through a turn lane and cuts you off).

I realize that this a controversial tip. On one hand, driving here feels a bit like combat. Some days it’s like carmageddon – every driver for himself. So using your signal feels wrong since it’s like telling the enemy what your next move is. But on the other hand, since motorbikes drive on the inside and have a tendency to go straight when you’re turning, using your blinker will help prevent making a motorbike-pancake. You get bonus points for that! (Score 2 points.)

Tip #6. On one-way roads, note that you may be the only one going the correct direction. 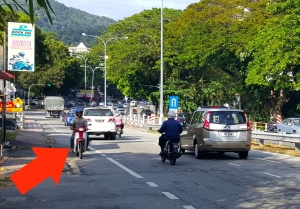 Imagine you’re on a one-way road, coasting along all relaxed, thinking that for once, you’ve got no risks of head-on collisions – hurray! Then out of the damned blue, a motorbiker with his wife and toddler on back spontaneously shoots out of a perpendicular alley – without looking – and drives RIGHT AT YOU.

Pop quiz! Do you: A. Scream and possibly have a heart attack. B. Hope you didn’t pee your pants. C. Initiate evasive measures like you’re ninja James Bond and hope to God that the car beside you is operated by a seasoned Malaysian driver who telepathically senses your oncoming violent swerve and fades. D. All of the above.

If you answered D, score 3 points! This situation has happened to me many times – I’ve got the white-hairs-of-fright to prove it.

Oh yeah, and if that reckless motorbiker hits you, guess what? You have to pay him! That’s right, even if a motorbiker is breaking the law when he hits a car, the automobile driver is still expected to pay the motorbiker on the spot because the biker is considered “less fortunate.” Don’t ask me to explain this, because it defies reason and makes my brain hurt. I once saw a motorbiker – who was busily texting – plow into the back of a car that was stopped at a light. The biker angrily scraped himself off the asphalt and proceeded to yell at the car’s driver until the poor freaked out lady shoved 100 ringgit out her window and drove off. (3 points for the driver of that car).

If you’re alive by the time you reach your home, you win! Tally up your score. Your total is the number of times you should take Uber before you dare to drive again.

What doesn’t kill you makes you stronger, right? If your heart doesn’t stop when someone passes you on a blind turn, perhaps the adrenaline that shoots through your body will help clear some arteries. See, there’s always a silver lining, right? (Although in this case, perhaps I’m mistaking that with a close-up view of a car’s fender…)

Got a nightmare story of driving in Malaysia (or another country)? I’d love to hear it! Please share it in the comments section so we can commiserate and celebrate your survival. 🙂 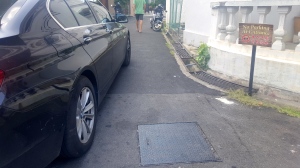 Nice parking. I assume you did it while wolverines attacked your eyeballs. Do you happen to see the sign that says NO PARKING AT ENTRANCE?!

2 thoughts on “How to Drive in Malaysia Without Dying”