Falling on the 8th night of Chinese New Year, the Jade Emperor God’s Birthday Festival is an incredible feast for the senses and everyone is welcome to join the fun. The action centers around Chew Jetty, where people of Hokkien descent take over Weld Quay to throw an enormous birthday bash.

What birthday is complete without candles? Well, those pretty dragons aren’t candles – they’re super cool joss sticks that burn for hours and smell like heaven.

Before we continue, I must tip my hat to Penang’s Chinese residents for their amazing stamina. They’ve just spent 8 exhausting days cooking, eating, sitting in traffic, eating, visiting relatives, eating, setting off fireworks, eating, and then they rally to put on this amazing festival. Respect! As my friend Terence says: “Only in Penang! My U.S. customers always ask me: ‘When do you guys ever work?!’ We celebrate all festivals, including Thanksgiving!”

And celebrate they do! The action starts around dark. By the time I get there at 8, performances are in full swing on the big stage at Chew Jetty. Drummers beat huge kettle-drums, dancers in traditional dress twirl, jugglers juggle, lights flash, and fireworks boom in the background. 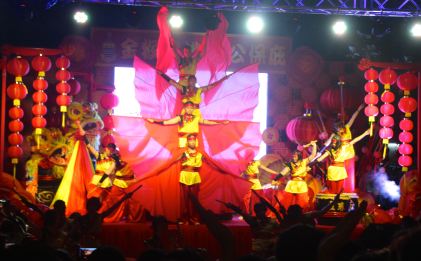 Making my way toward the glowing red lanterns decorating the Taoist shrine opposite the stage, several costumed people happily pose for photos with devotees and curious visitors alike. I have no idea what the heck it’s all about. My friend Jenny, who was born and raised here, says they’re like ancient Asian Marvel heroes. (I’m fairly sure she’s messing with me, but hey, she’s Hokkien, so I have no choice but to trust her expertise on the subject).

Let’s call this ancient Asian Marvel character “Captain Tickle Cowboy” for his impressive use of fringe and his giant curved pheasant feather that tickles the unsuspecting from behind. (See the feather there on the left? It’s about to claim another victim.)

At the shrine, the fragrant, lightly-perfumed scent of thousands of joss sticks wafts over the crowd. Devotees pray and lay out their offerings of bread loaves shaped like adorable little piggies. 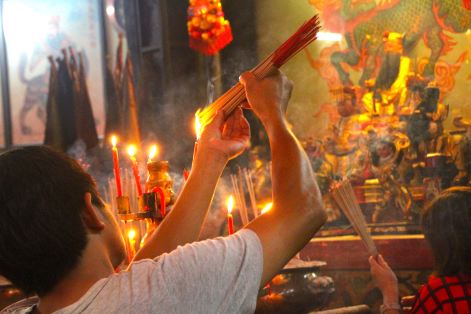 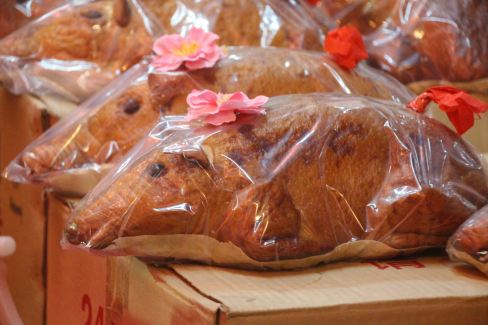 “I hate to say I thought they were cooked rats in a bag at first,” says my friend Carolyn. “I’m glad they’re just bread pigs!” (Yeah, me too.)

Heading out into the street, which is thankfully blocked off, thousands of people whip out their selfie sticks to watch lion dancers on stilts through their phone screens. What a beautiful spectacle! (Not the glittering sea of glowing phones, but the dancing, jumping lions). Two guys are in each costume – one at the head, one at the tail. In perfectly choreographed moves, they jump and dance from one elevated pole to another, making their lions shake and roar, play together and even chase each other. All the while, fireworks blossom behind them in flashing, crackling burst of red, white and yellow.

Beside the lion dancers is a half-block long table, and at the head of the table is an effigy of the Jade Emperor God. Throughout the night, devotees load the table with baskets overflowing with fresh fruit, huge bottles of top-shelf liquor, roasted pigs, cooked crabs and cookies. 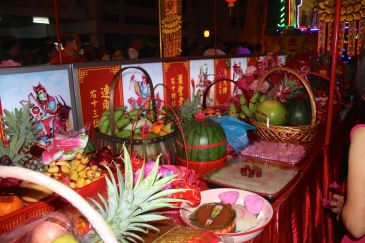 All around the area are pretty flower-shaped ang kong kim (also called “hell notes”), which are notes for the Hokkien peoples’ deceased loved ones. Around 11pm-1am, piles and piles of these ang kong kim are burned in huge bonfires in the streets and in front of peoples’ homes. According to Jenny, Chinese people like to offer things to their dead family and friends, like messages and paper money, and burning them helps send these goodies over to the other side. 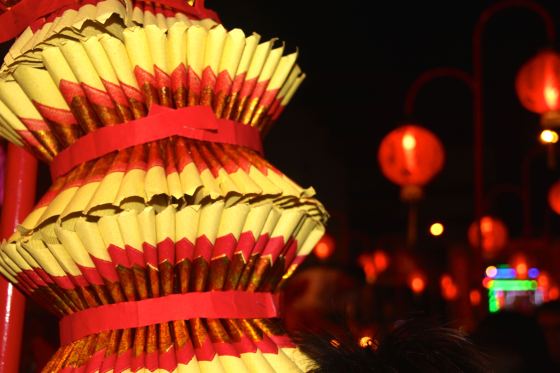 Apparently the afterlife is expensive. Burning these ang kong kim supplies dead loved-ones with some much-needed pocket money. (Hmm, do ghosts have pockets?)

Then the feasting begins! Everyone is welcome to share the delicacies on the offering table. And of course, the ever-present boom and flash of fireworks overhead accompanies the feast. What a unique festival! It’s definitely a great one to experience in person.

When: At dark on the 8th night of Chinese New Year (the date of which changes every year)

Where: Chew Jetty at Weld Quay

Parking: If you’re planning to go and don’t want to get stuck in soul-shriveling traffic, get there before sunset and park at Fort Cornwallis and walk up Weld Quay.

Pro tips: Wear comfortable shoes; charge up your phone/camera; take an afternoon nap so you’ll have enough energy to last the night; and bring your appetite!

Oh, and the Jade God Emperor’s birthday is actually on the 9th day, but the festivities are held the night before.

“So what’s up with all the sugarcane?” you might ask when you see the stalks all over the place. According to legend, the Hokkien people were saved from their enemies when they hid in a sugarcane field during a battle. So that’s why you’ll see lots of sugarcane stalks around the festivities. 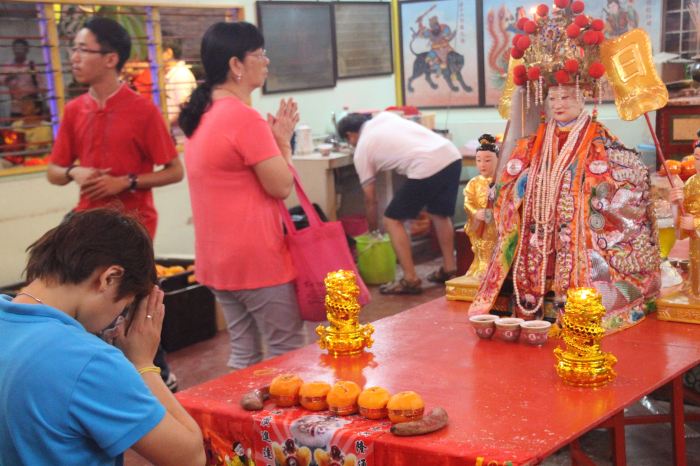